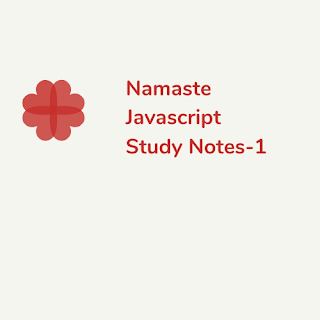 These are the study notes of the famous javascript course Namaste Javascript. I was creating this for my personal study but later thought that it might also help others. If you are confused or not getting any point do watch the course.

After the code phase is finished the execution stack becomes empty.

We explain this using example,

So here if we run the above program we will not get errors. We should have got an error as we are accessing function getName() and logging the value of x before declaring it.

But if you have read the Javascript execution context then there it is given that when we run any  JS program runs in 2 phases.

So in the first phase memory is declared, Variable is assigned with undefined and function with its code.

So that's why we didn't get an error.

If we run the above program we will get output as,

But if you define function as function expression for example,

It will treat getName as a variable as will be assigned undefined. So if we run the above program again it will give an error getName not function because we are calling a variable and not function. It will behave like a function in the code execution phase and not the memory phase. So if you define arrow function or function as a function expression you can't access it before declaring it.
Note: We can only access variables defined with var before initialization. . In case of let and const though it is hoisted but cannot be accessed before initialization

console.log(b)// will print 10 as c has access to its parent memory i.e a.

console.log(b);// b is undefined as b is not defined in this env as this env is global and has no parent.

Here we can say that the c function is lexically inside the a function.

This chain is from child to parent and is called a scope chain. If a value is not found in local memory Javascript will check for parent scope if the value is present again if not present will check its parent scope like this until it reaches global scope. We can also say that this whole chain of lexical env is called scope chain.

5)Temporal Dead Zone: It is the time between the let and const variable is hoisted to the time it has initialized with some value. In the dead zone, you cannot access the value of variables.

To write multiple statements we used block in javascript.  It is also called a compound statement.

Block scope means what all variables and functions that we can access in that block.

This is called shadowing of variables. Here var b inside the block is shadowing var b outside the block. Also, it is changing its value.  If you open chrome and debug you can see var b (outside block and inside block var b is stored only at one place and not 2 separate places unless var b is defined inside any function) is stored in global space so any change in var b will change its value.

Here is a screenshot, 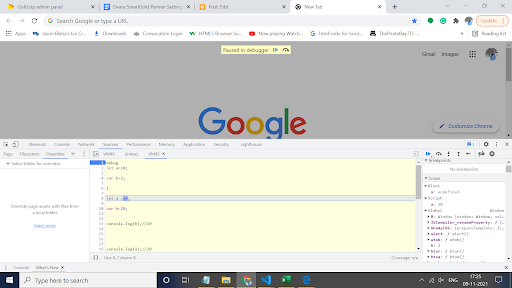 7)Closures in Javascript: A function along with its lexical environment is called a closure.
Ex:
function x(){
var a=7;
function y(){
console.log(a);
}
return y;
}
var z=x();
z will store function y with its lexical scope. So if call z() function it will log a=7.
It has access to var a as it is a closure.
Uses of closures:
1)Calling a function only at once. If we want this kind of functionality then we can do it by using closures.
2)Maintaining state in the async world
3)Making data encapsulation.
Disadvantage:
1)There can be overconsumption of memory when we create a lot of closure in our program.  As these variables inside closures will not be garbage collected until the program expires and may freeze the browser. So this can be a disadvantage.