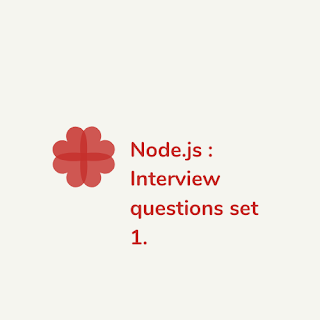 This question is asked many times don't know what special it is.

The pattern used across all the asynchronous methods in Node.js is called Error-first Callback.

Here is an example:

Any asynchronous method expects one of the arguments to be a callback. The full callback argument list depends on the caller method,

but the first argument is always an error object or null.

When we go for the asynchronous method, an exception thrown during function execution cannot be detected in a try/catch statement.

The event happens after the JavaScript engine leaves the try block.

In the preceding example, if an exception is thrown during the reading of the file,

it lands on the callback function as the first and mandatory parameter.

Enables you to validate and override behaviour of nested pieces of code such as methods,

require() and npm modules, or even instances of classes.

we can override that with stub and test our code.

3)What is the Event loop in Node.js? (Mostly asked question)

The event loop is what allows Node.js to perform non-blocking I/O operations —

despite the fact that JavaScript is single-threaded — by offloading operations to the system kernel whenever possible.

Node.js is a single-threaded application,

but it can support concurrency via the concept of event and callbacks.

Every API of Node.js is asynchronous and being single-threaded,

they use async function calls to maintain concurrency.

Node thread keeps an event loop and whenever a task gets completed,

it fires the corresponding event which signals the event-listener function to execute.

Note: You should be able to explain more on this topic as the interviewer will judge you on this.

4)For which use case we should not use node.js?

We should not use node.js for cpu intensive tasks as though we have an event loop

but if all requests are CPU intensive then it may block the event loop.

Node.js: Bundling your Node.js application to a single executable for Windows.